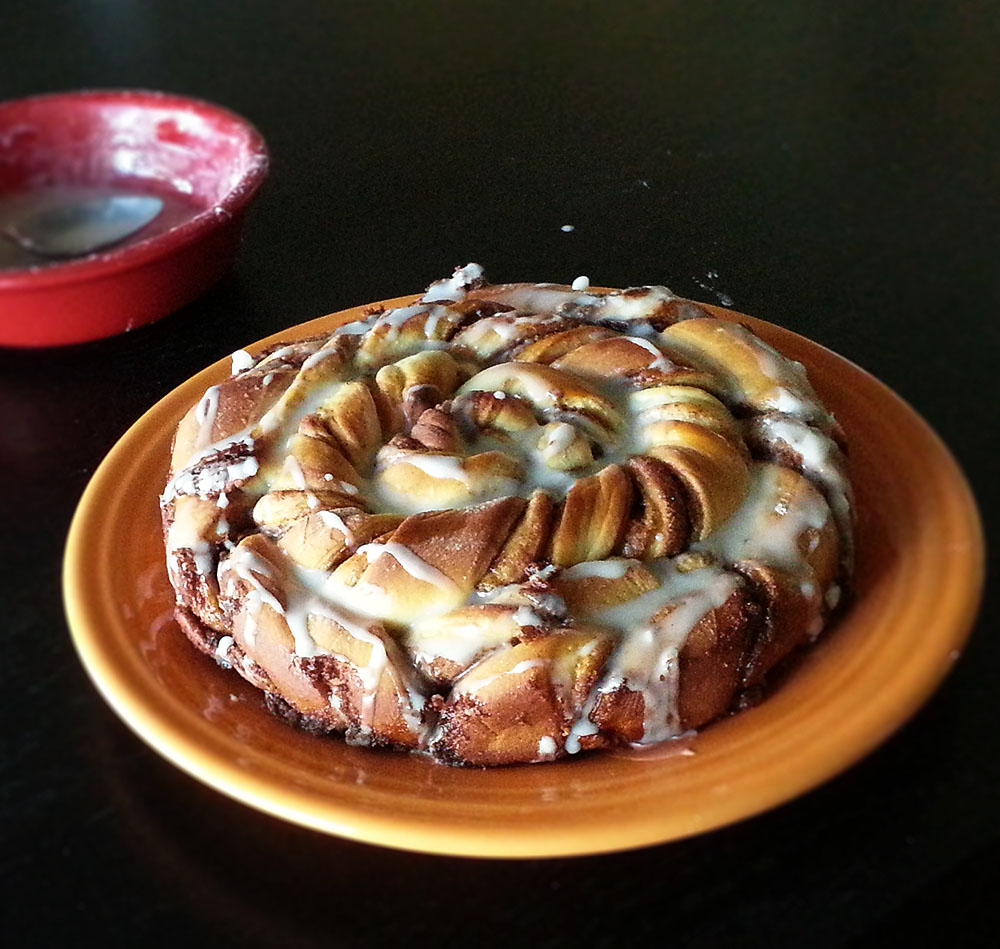 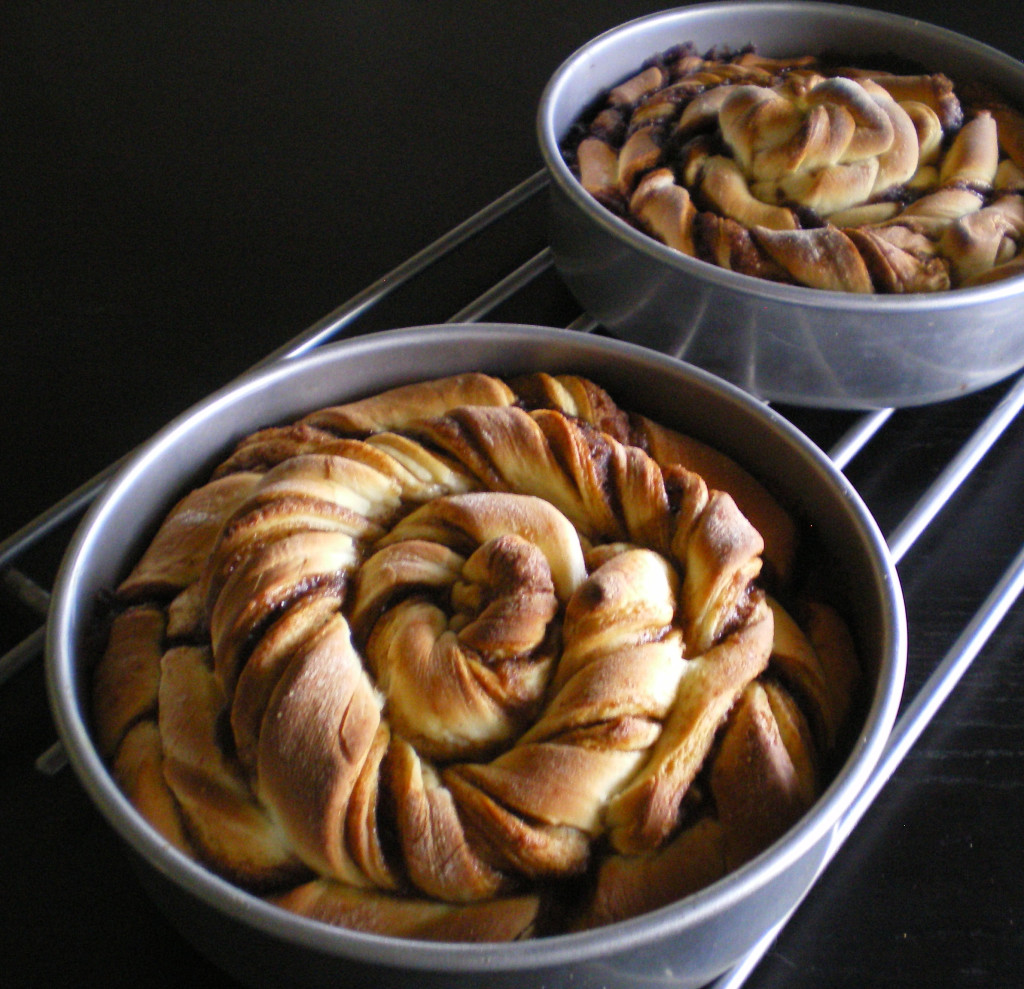 Awesome recipe from Poet in the Pantry – only without the chocolate chips. 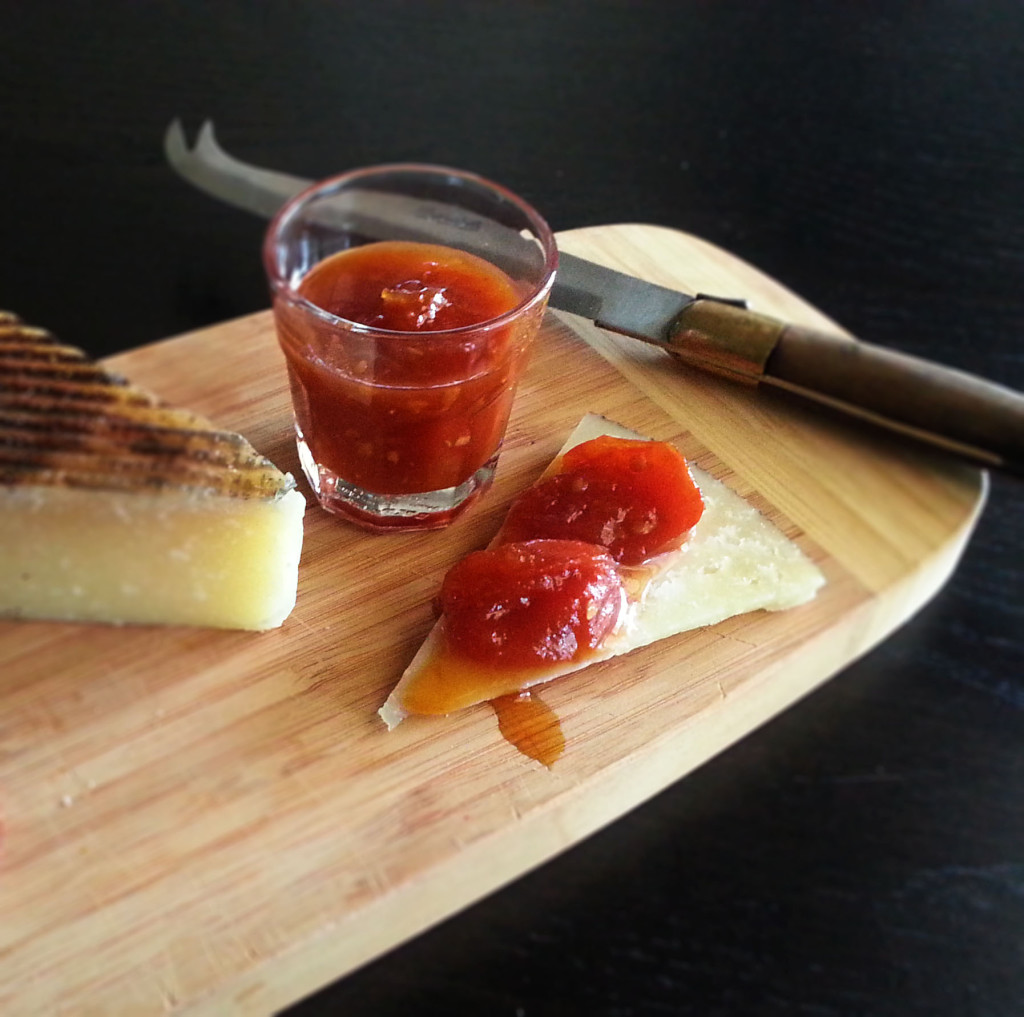 So, you know when you go to Costco and get that HUGE clamshell of cherry tomatoes, and you tell yourself – Oh! I’ll eat all of them. They look so good! I’ll have some every day!
Only a week later they look like this? 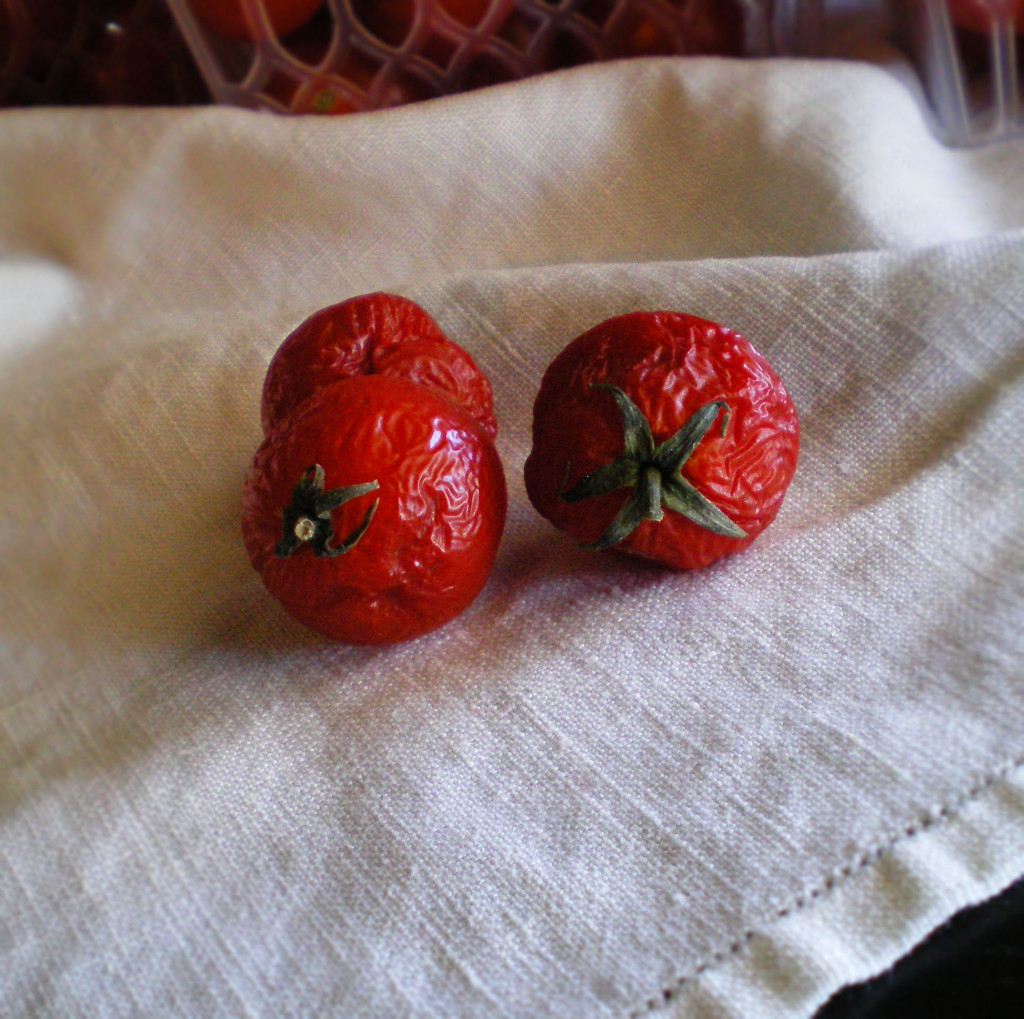 Or, maybe you have a neighbor who went to Market on the Move and brought you four pints of them? (Because you have the best neighbors ever!) 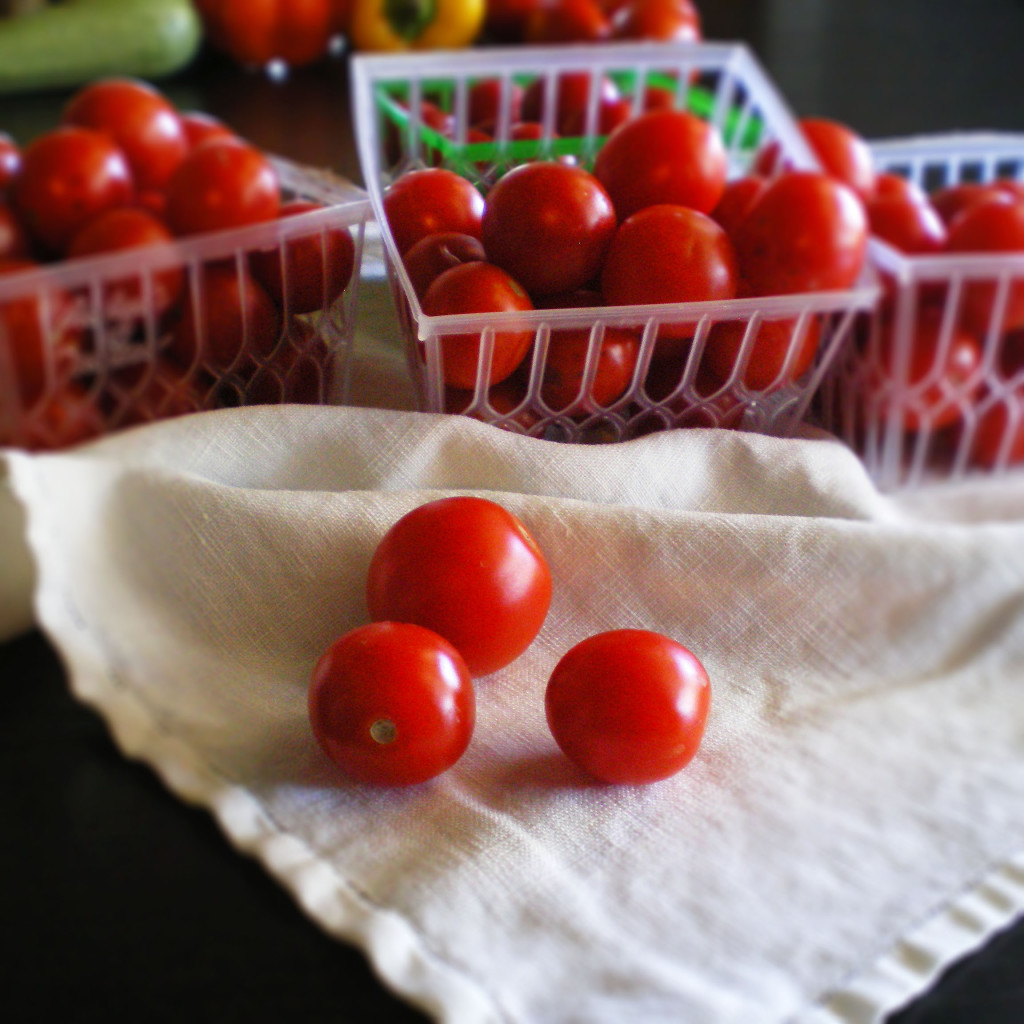 What to do, what to do? Soooo many cherry tomatoes. Some a little on the sad side. Well at our house, that means cherry tomato jam.

This stuff is like grown-up ketchup – it goes on everything.  On a sliced baquette with some goat cheese. On a pork chop. On a ham and cheese scone. On a bacon sandwich. Everything, I tells ya.

I make mine with the toms, some grated onion and sliced shallot, thyme, sugar, balsamic vinegar, worcestershire, garlic and olive oil.

Since these were M-O-M cherry tomatoes, and most likely not organic, I gave them two good washes with soapy hot vinegar water. 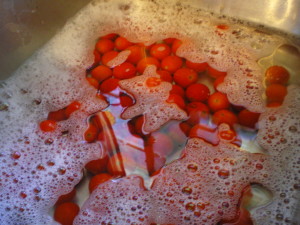 Anybody with a split skin, I tossed.  (Hello? Hot soapy vinegar water?)  Next, slice the toms in half. These aren’t cranberries – they don’t automatically pop when they’re done. Trust me, I’ve tried.  You get stuck trying to mash them at the end and it’s a pain. Plus, this way you can inspect each one. 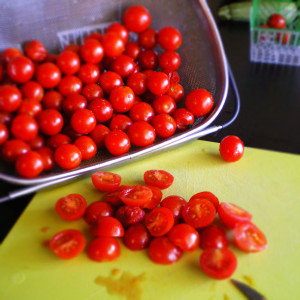 Throw them in the pot and simmer on low for a couple hours. I actually wound up having to add some tomato paste to mine. It *is*January, they weren’t exactly chock full of tasty tomato-loids. 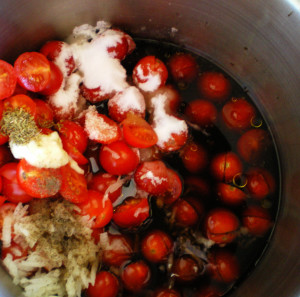 You can can it at this point. Or freeze it. Or just toss it in the fridge for up to a few weeks. I’ve been known to make a mini batch of these when I’ve got a partial pint mummifying on the counter.

I tried to use less sugar this time, and it did not set up – it’s like a thick tomato jam sauce type thing. But still *very* tasty. Just not as pretty. And, unfortunately, I’ve promised some to friends so hello, cooking shame. Haven’t seen you in like…a day.

No process shots this week, kids. Just the final product – this is a planned over.  When chicken breasts are on sale for 99 cents a pound, I always buy a big pack and roast them, then dice them and freeze them for quick meals through the week. 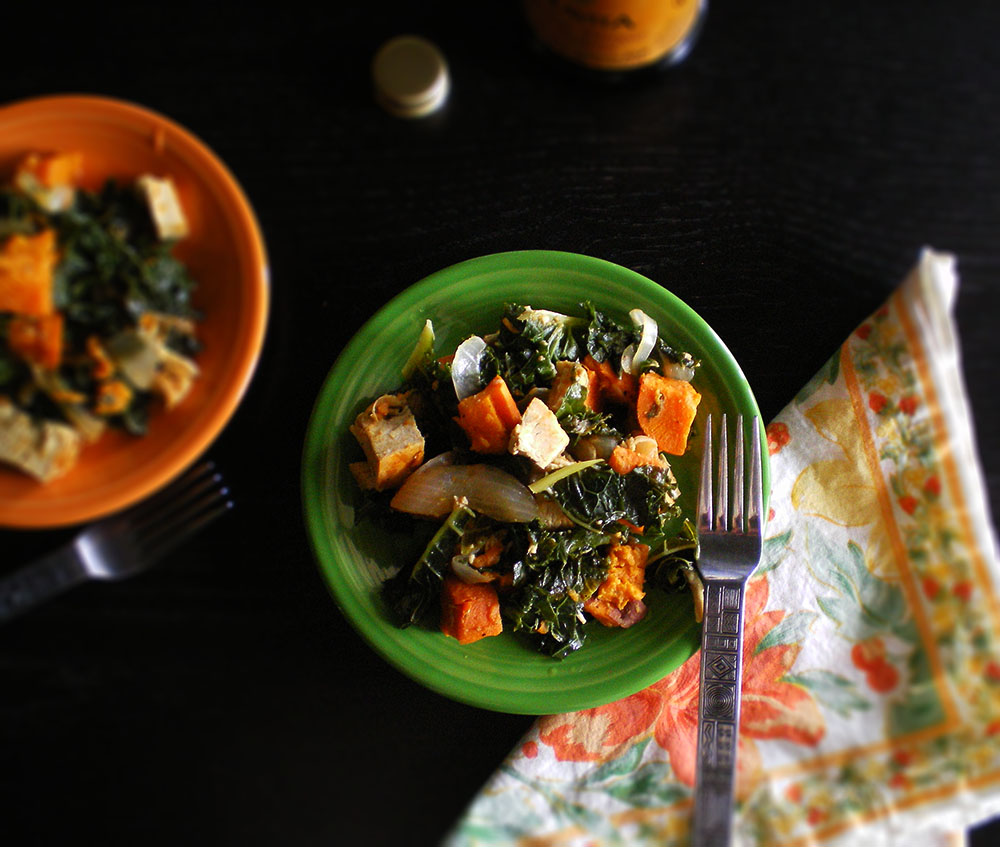 This dish features beautiful kale – they way it is best. Sautéd with garlic, served with a touch of balsamic vinegar.  Not puréed in to some hipster smoothie like a hamster shat in your glass, or baked to a chip that looks and tastes like the shit petrified in your fridge for six months.  No, this is luscious, tender but firm, sweet and slightly bitter.  A fantastic foil for the melting sweetness of the onion and potato. Yum! 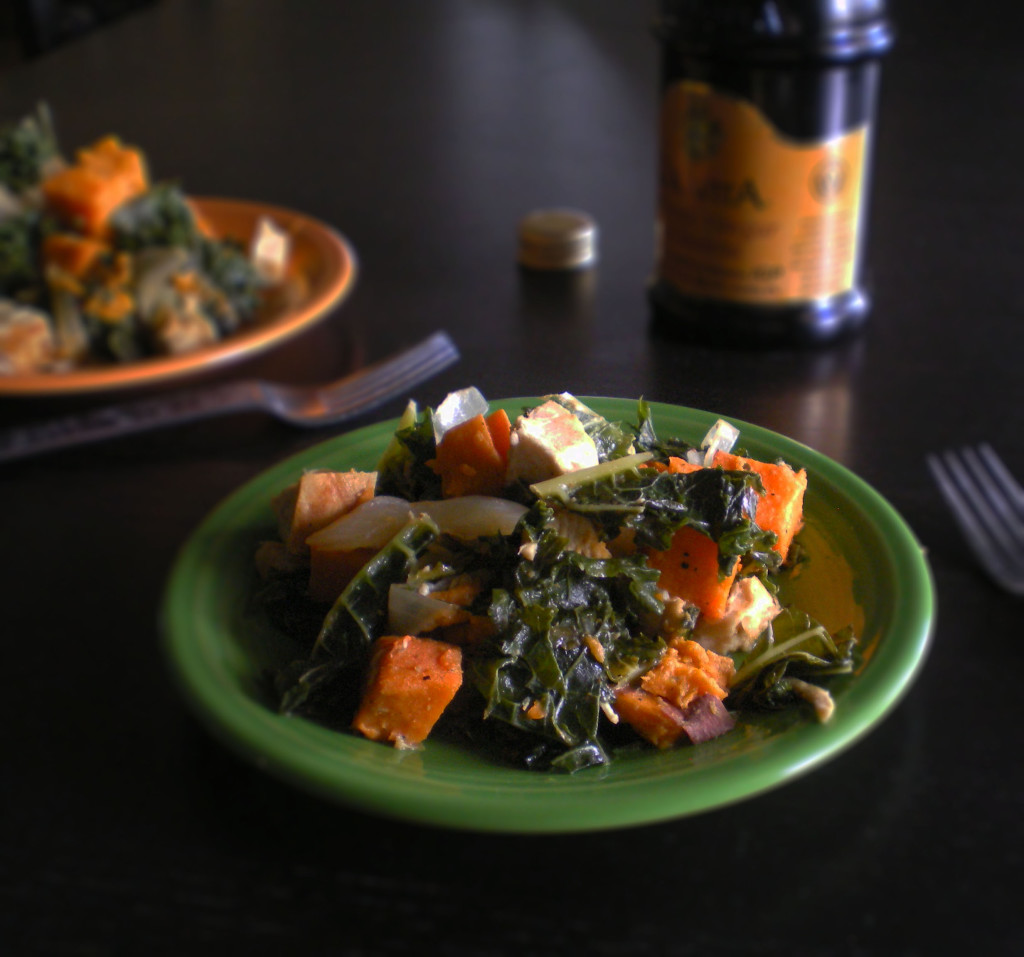 Our neighbors went to Market on the Move and brought us this beautiful eggplant. And peppers. And squash.

It’s “Meat-Free Monday” at our house. And, honestly at this trail-end of the holiday season if I see one more damn cookie or chocolate-covered-whatever, I think I’m going to explode.  So a ratatouille sounds just right. Fast and warm, full of yummy vegetables. Easy to make. Thanks to our neighbor’s generosity, now all the ingredients are on hand: 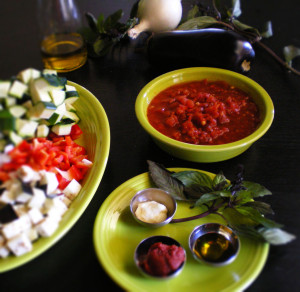 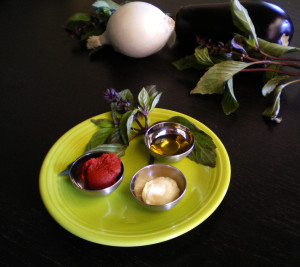 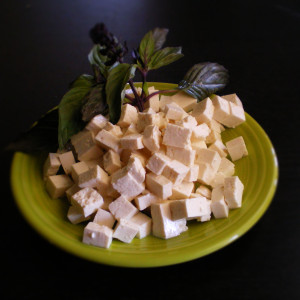 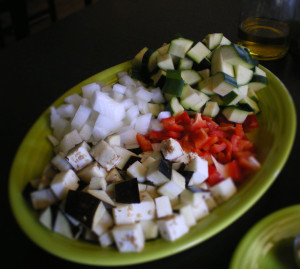 Put them together, and bam! So long, seasonal overindulgences.  Kiss my tofu. 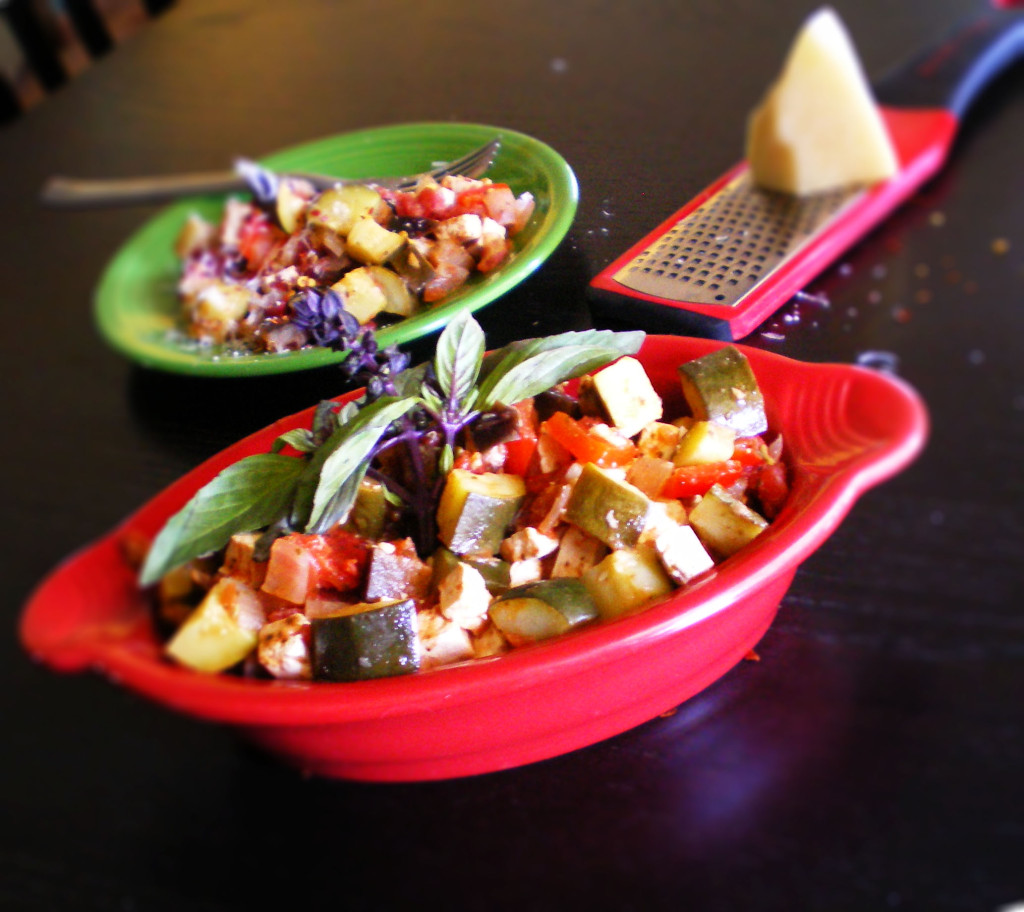