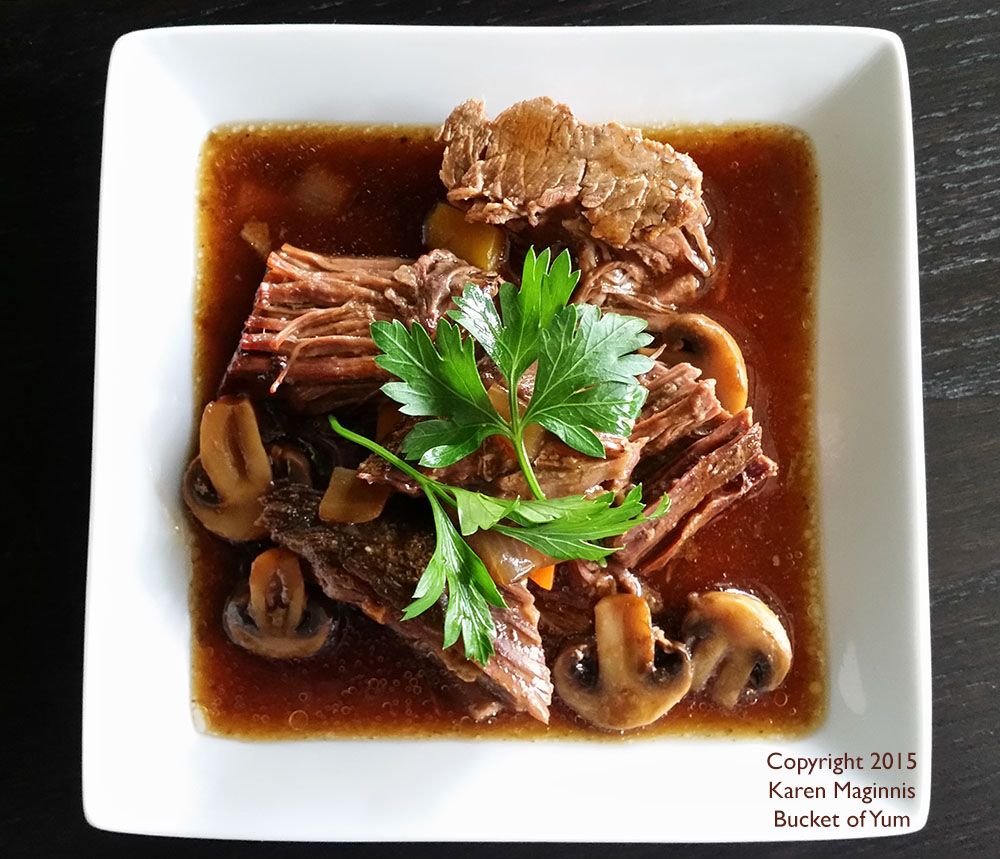 Beef! (Hopefully pronounced in your best butch voice.)  We really like a roast around these parts for Sunday dinner.

Typically, I roast my veg and all with the meat, but since I want to set aside some of this bad boy for some barbacoa and some bbq beef later this week, I’m doing him up plain with garlic salt and pepper. 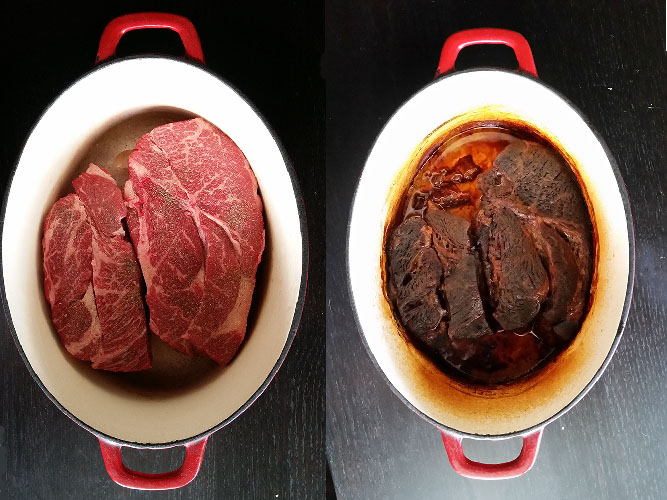 This is a recipe for a quiet day at home – it roasts for a good four or five hours. And before you ask about using a crock pot, just, no. What makes this dish work is that the the liquid slowly evaporates during the roasting, so the meat stays meaty and doesn’t turn to mush. 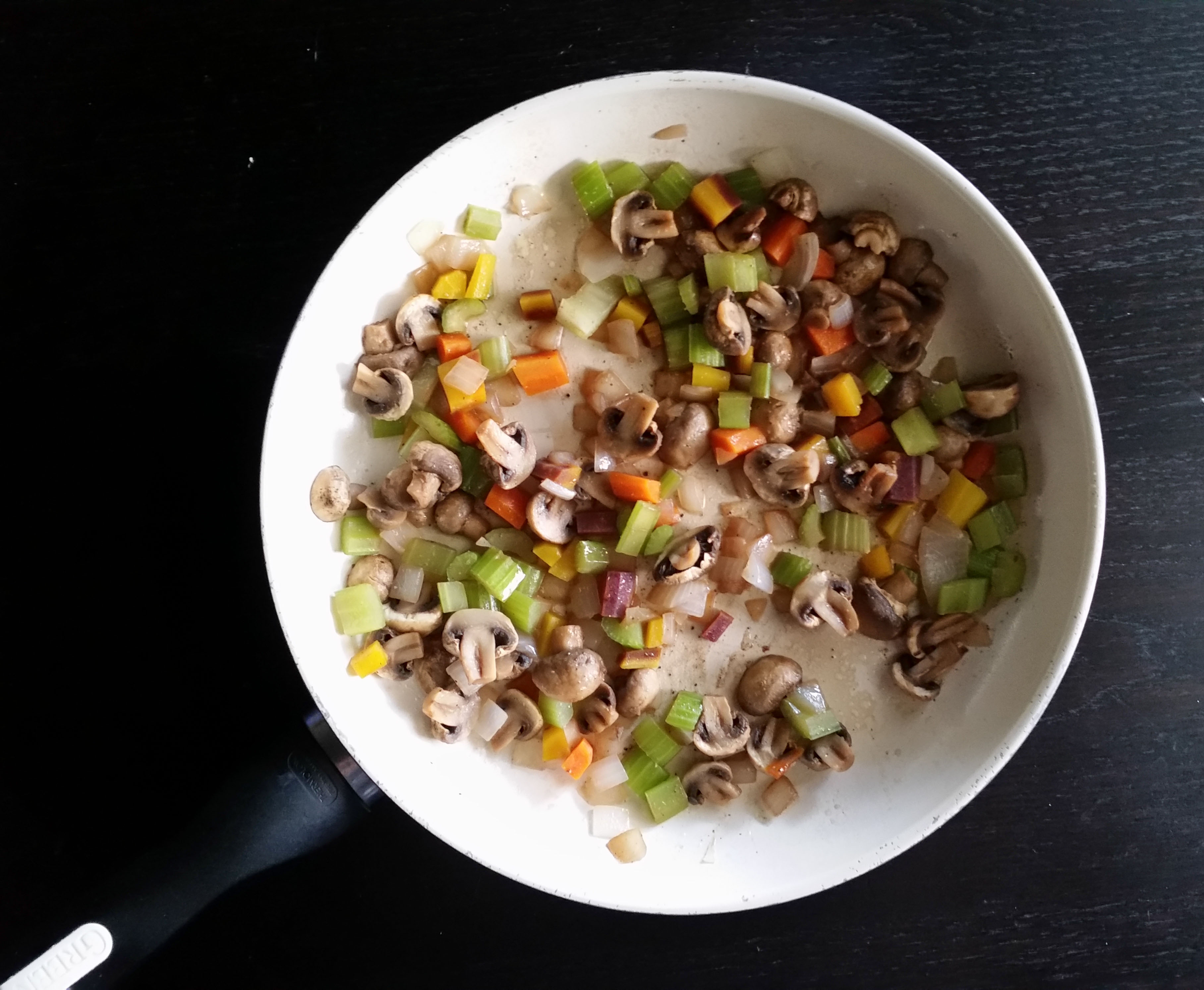 Since I didn’t roast the veg in the pan, I cook some up on the stove top to go in the gravy.

There are three secrets that make for a great pot roast at our house: porcini, brandy, and Bisto.  (You can get that magic at Amazon and sometimes World Market. ) What is this sacrilege, you decry?!? Am I using gravy mix??? Hell no. Bisto is a thickener, with some carmel color and potato starch.  It makes your gravy deep brown and shiny. You know how flour slurry can lighten the color of your gravy? Bisto doesn’t do that. It does add some salt, though, so be careful and season at the end.  Seriously, buy some of that shit immediately. You will be SO happy. 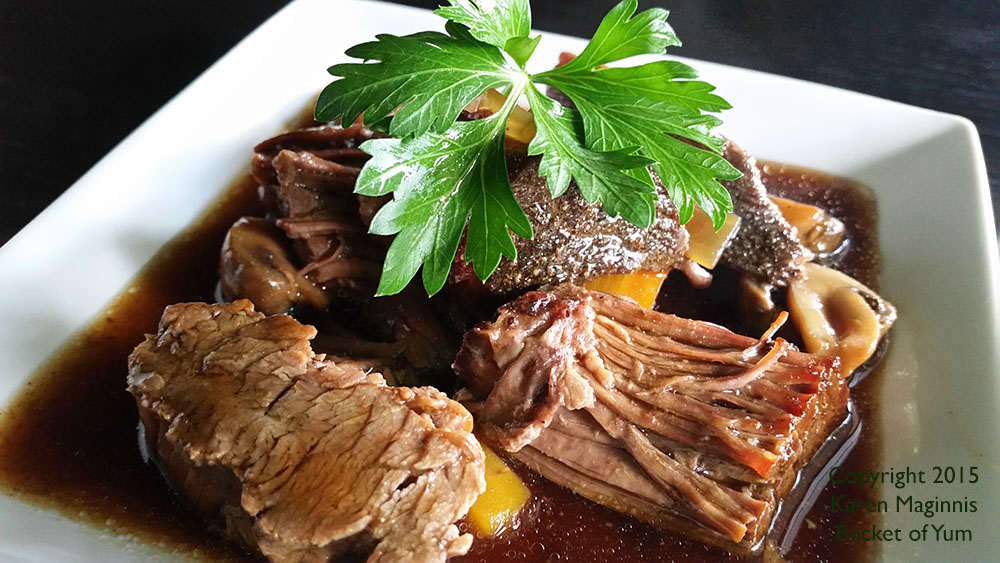 This recipe has a lot of steps – but don’t be escared. It’s leisurely, and freaking delicious. Try it and tell me how it went!

For the roast
4-5# chuck roast
1 qt beef broth
Garlic salt & pepper.
Past their prime onion, carrot and celery, washed.
For the sauce
¼ c. dried porcini mushrooms, soaked in
1 c. hot water
2 Tbsp. bacon fat or butter
½ c. diced white onion
½ c. diced celery
½ c. diced carrots
8oz pkg button mushrooms, sliced or quartered (your preference)
½ c. brandy, or marsala or dry sherry
1 tsp. dried thyme
3 c. beef broth (defatted from the pan, you may need to add some to get to 3 c.)
½ c. cold water mixed with 2 heaping Tbsp Bisto gravy granules, or with the same quantity of flour if you don’t have Bisto. The Bisto makes the gravy more brown and shiny (it’s potato starch based).
S&P to taste
Instructions
Heat oven to 325*
In a large enameled cast iron dutch oven, put the veg. They’re the roasting rack and you’re tossing them when this is done so no need to peel or chop – just break up the big pieces with your hands.
Place the roast on the veg layer.
Pour over the broth. It should come about 1” up the meat.
Season with the garlic salt and pepper.
Roast with the lid on for five or so hours. You’ll know when it’s done –
the roast will be quite brown and falling apart.
When the meat is done, remove the roast from the pan and use a spatula to scrape down all the brown bits on the sides of the pan in to the juices. Toss the veg, and pour the pan juices in to a defatter or a large pyrex that will be easy to pour from.
This next part you can do about ½ before the roast is done, or after you take it out of the oven. In a very large (12”) skillet, gently sweat the onion, celery, mushroom and carrot in the bacon fat, with salt, pepper and the dried thyme.When they are almost tender, turn the heat to medium and add in the brandy and cook it down. While that is reducing, remove rehydrated porcini from their liquid, mince them and add them to the pan. Strain the porcini soaking liquid through a paper or gold mesh coffee filter and add that liquid to the pan (they can sometimes have fine sand.) Add 3 c. of the defatted beef broth and then whisk in the the bisto or flour slurry. Cook over medium until thick. Season to taste with salt & pepper (if you used flour. ) For four people, slice up about half of your roast, and gently add it to the pan. For 8 people, put it all in. The gravy ratio is higher with the four people version. obvs.
Serve with buttered egg noodles, or mashed potatoes, or cauliflower mash.
Notes
If you like a thicker gravy, cut the stock down to 2c. Don’t go nuts with the Bisto or it will be too salty 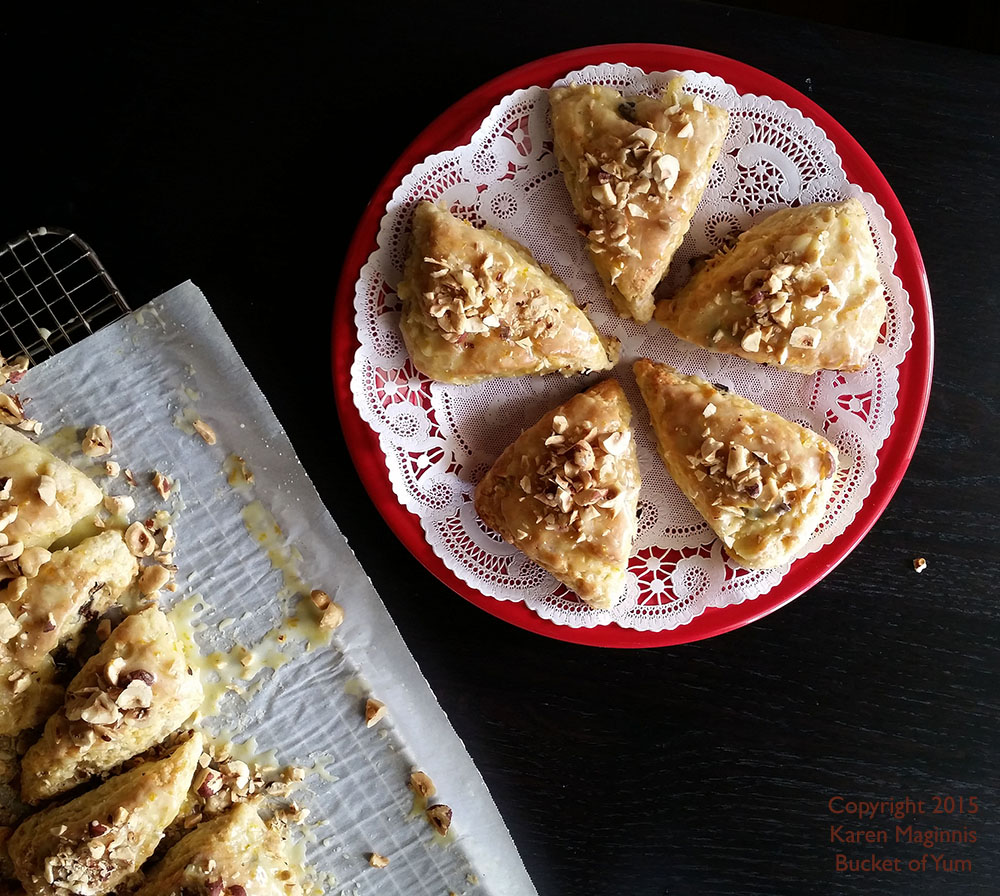 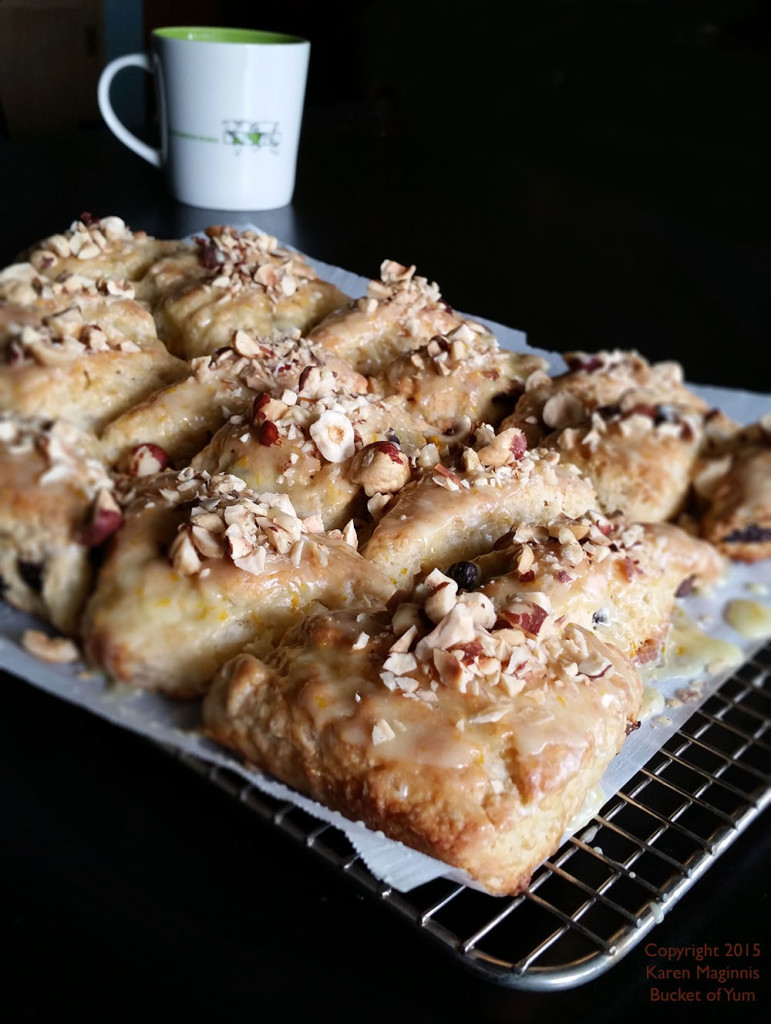 What’s this? A scone post on the Yum? Inconceivable! 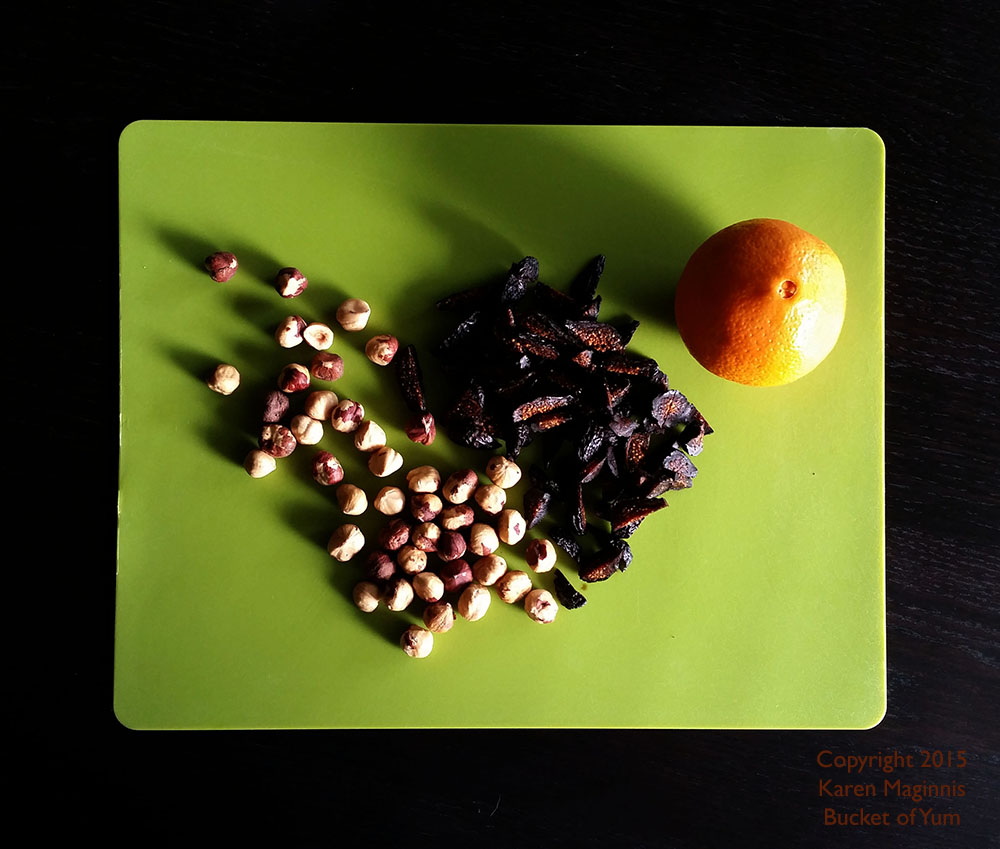 I was wondering how this flavor combination would work, so thought we’d give it a whirl. 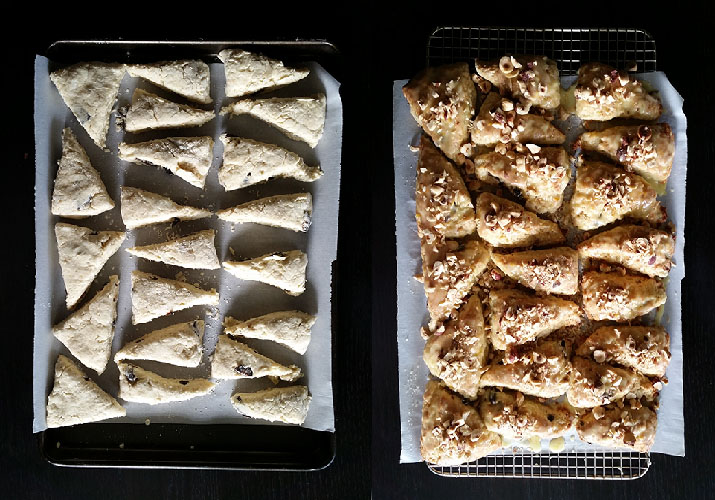 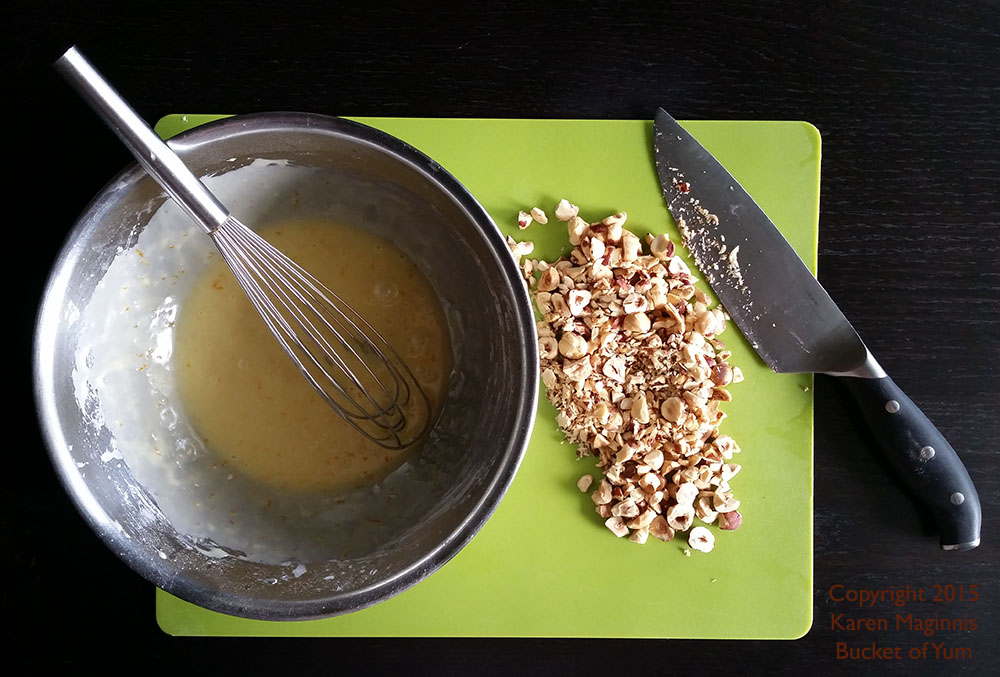 Honestly, if I make these again I think I’ll soak the fig slices for a few minutes in some warm water with the spices, orange zest and vanilla.  Himself said, “What?! Not brandy?” But the fact that he’s a smart ass is why I love him.

Autumn is coming. Time for some scones.

For the wet
1 ¼ c buttermilk
1 egg yolk
1 tsp vanilla
For the dry
3 c flour
3/8 c sugar
1.5 sticks butter
2 tsp bkg pwd
¾ tsp bkg soda
1/2 tsp salt
For the fruit
1 c. cut dried black fibgs, quarterd and tossed with
½ tsp pumpkin pie spice
zest of half an orange
For the glaze
2 c pwd sugar
zest of half an orange
juice of 1 orange
For the topping
1 c. chopped toasted hazelnuts
Instructions
Preheat the oven to 375*.
Line a cookie tray with parchment.
Flour your work surface.
In a small bowl, whisk together the wet.
In a larger bowl, mix the dry.
Cut in the butter to the dry ingredients. A pastry cutter will yield a flakier scone; a food processor or mixer will yield a cakier one.
Add the fruit.
Barely combine the wet in to the dry/fruit mixture.
Turn contents on to floured board and gently, just barely knead it to a dough.
Split dough, shape each half half in to a 7″ disc about 1″ high.
With a sharp, floured knife, slice each disc in to 8 or so wedges.
Place the scones about 1″ apart on the lined baking sheet.
Bake for 15-20mins, until golden.
While baking, whisk together the glaze.
*Immediately* after removing the scones from the oven, brush them with 1/2 the glaze.
Allow them to mostly cool, then brush with the second layer of glaze and immediately top with the chopped nuts.
Notes
(if I do this again, I want to soak the fig slices in warm water with the spices, vanilla & some orange) 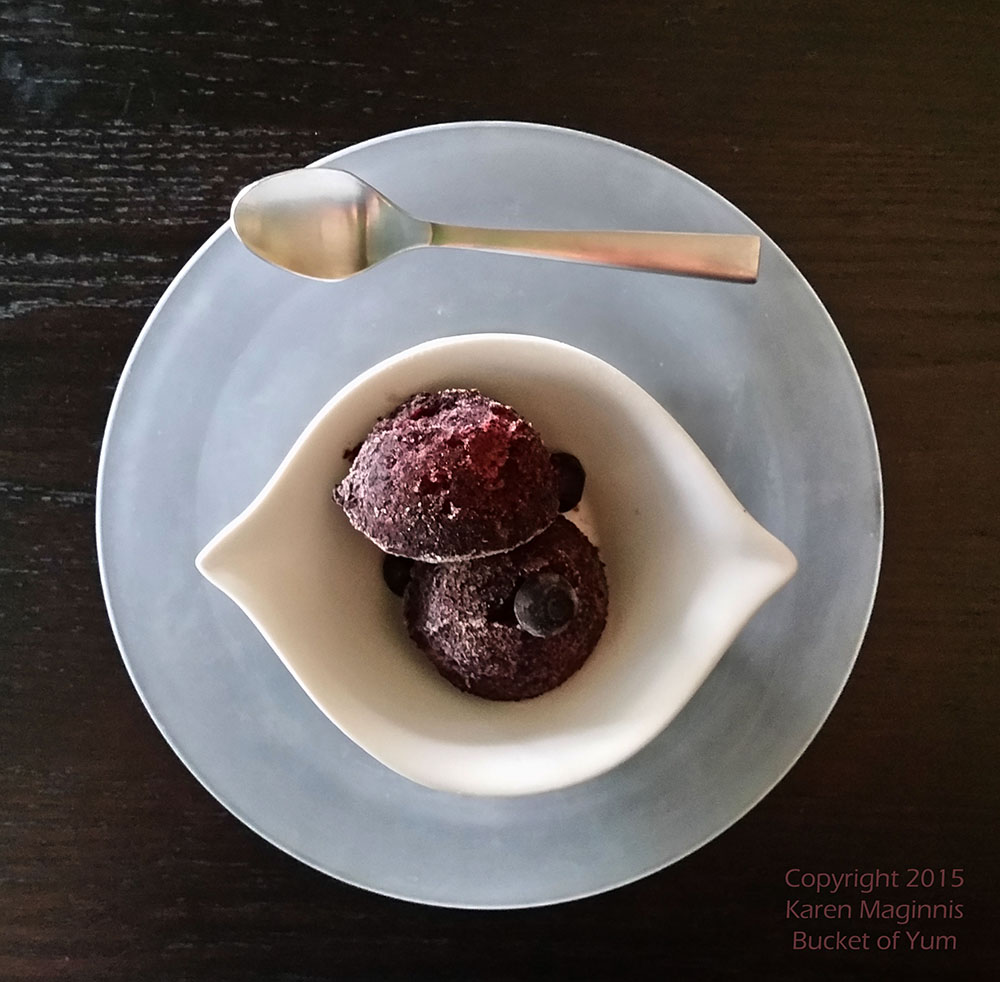 This is one of those cheater posts, where its so easy I feel guilty even sharing it. A two-ingredient wonder.   But this is yummy. And easy. And fast.   So, we’ll just have to suck it up and know it’s really close to the blueberry cheatagranita recipe I posted last year.

So, this serves like gorgeous soft serve when you first make it. But, I wanted perfect little boules so I froze it before scooping.  And, I’d say just make this and eat it.  Honestly, once it was frozen it actually flaked gorgeously in to a a granita…but that’s already here, so …. yeah. 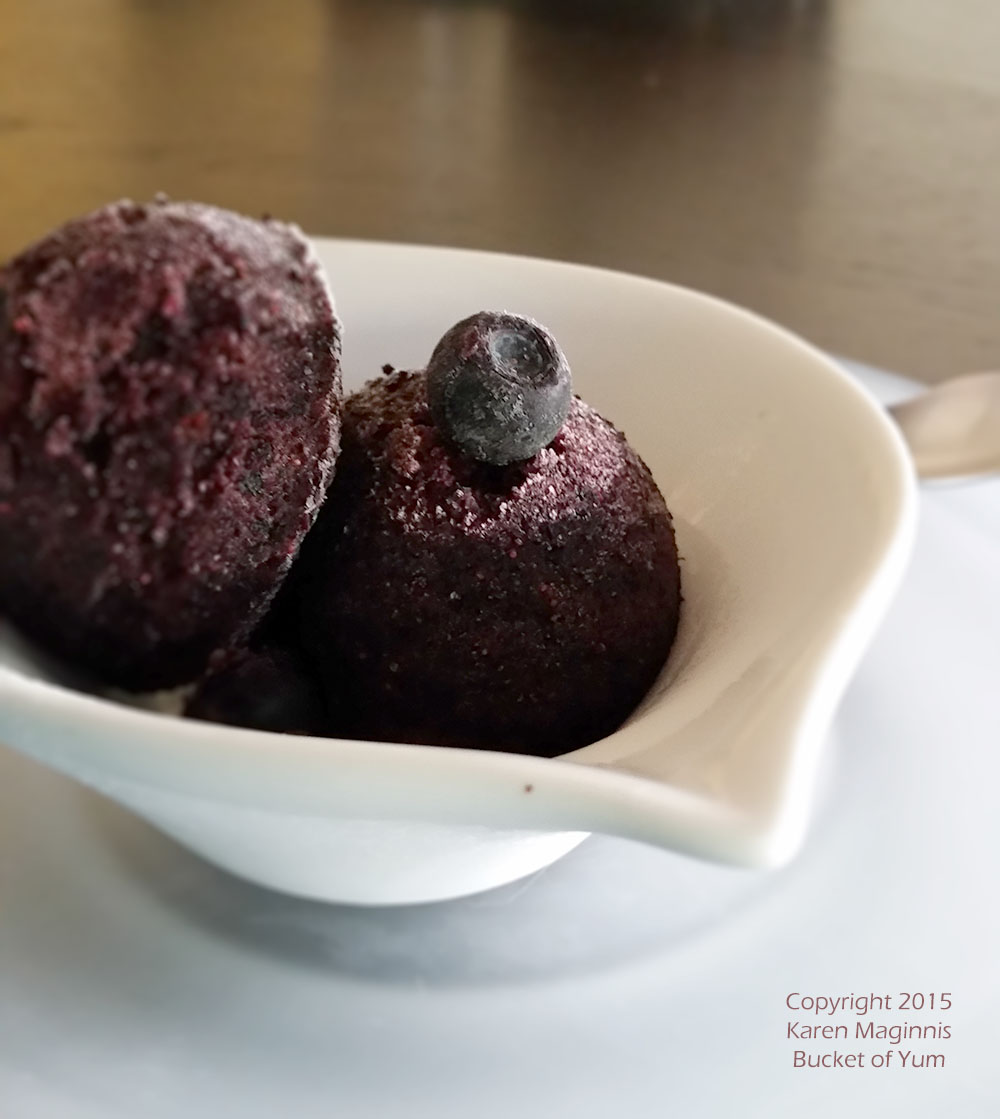 The longest part of this is the waiting. But hey, set out the blueberries when you sit down to supper, and then just whip together dessert.
Ingredients
3 c. frozen blueberries
6 packets Truvia or PureVia sweetener
Instructions
Put the frozen blueberries in the food processor, and walk away for 20 mins.
Once they’re partially thawed, sprinkle them with the sweetener.
Pulse until everything is mostly smallish and then leave the processor going for 1-2 minutes.
Scrape down the sides halfway through.
Stop when it looks like soft serve.
Garnish with some whipped cream or coconut cream or nothing. 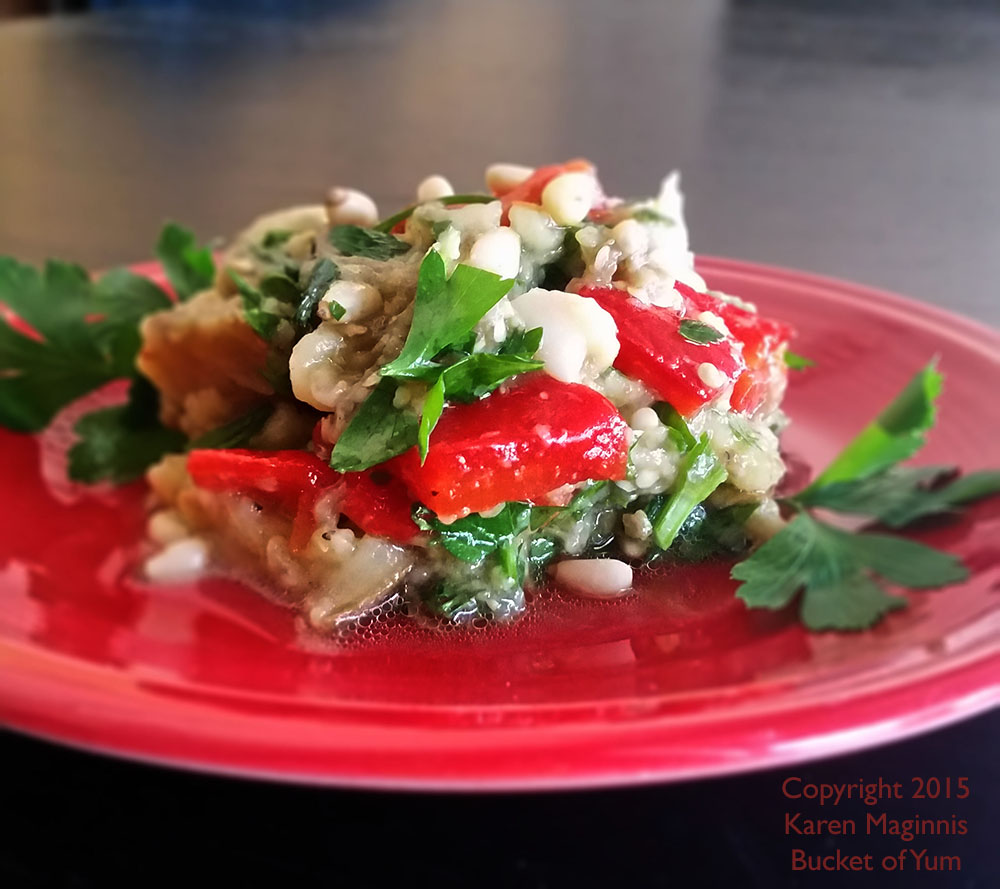 This is a rip off of a Turkish recipe that I came across in a Pinterest link/interwebs rabbit hole at the beginning of the summer that I cannot find again. (Shouldapinnedit). 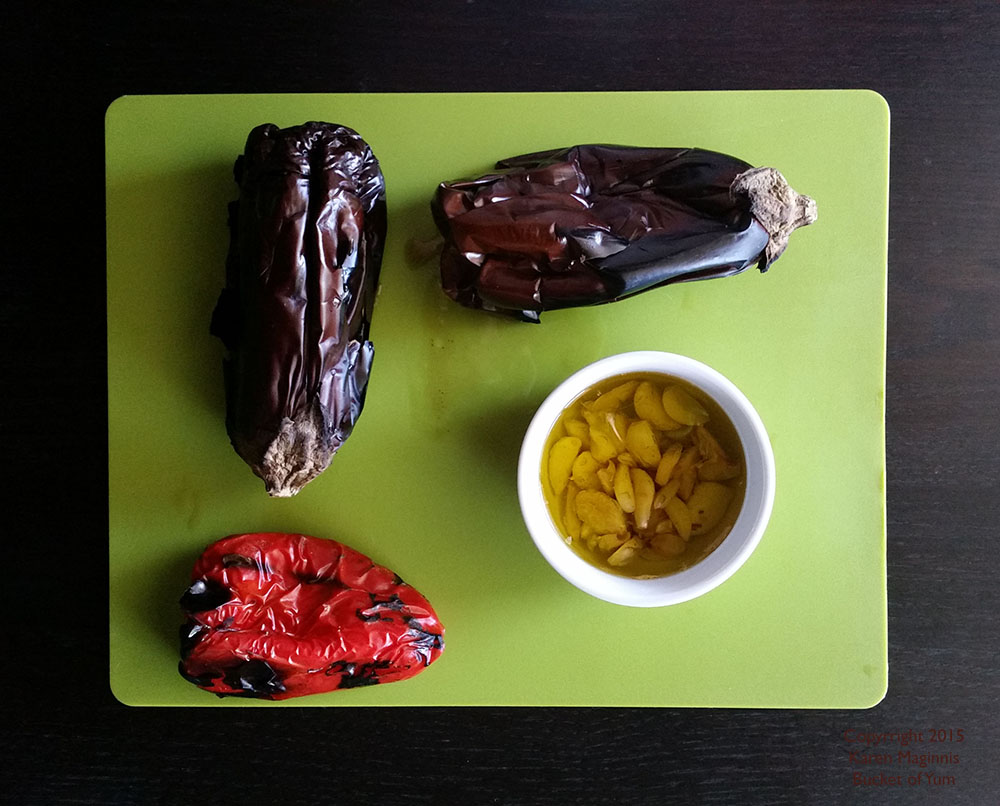 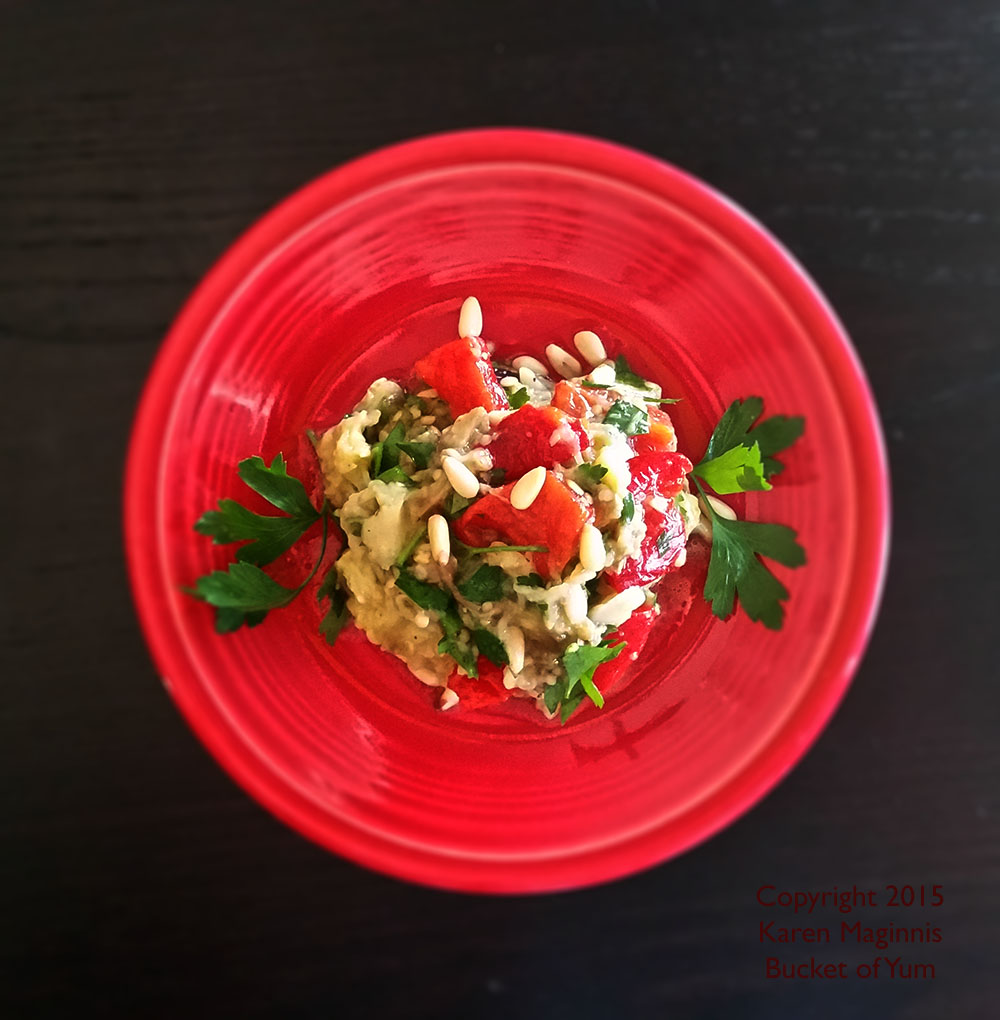 This is really best served room temperature or ever so slightly warm.

Gorgeous with mezze, or alone with some warm pita, or as side with roast chicken or kebabs.

Ingredients
2 med eggplant
1 red bell pepper
1/4 c extra virgin olive oil
6-8 cloves of garlic
Juice of half a lemon
1/4 pignon nuts
1/2 c. parsley
Instructions
Fire roast or broil the eggplant and the red pepper, turning until all sides are blackened.
While those are cooking, put the olive oil and the garlic in small sauce pan on very low heat.
Cook until the garlic is soft. It should not brown.
When the veg are blackened all over, put on a plate and cover with a bowl to loosen the skins.
Peel and coarsely chop the eggplant and the pepper.
Coarsely chop the confited garlic, and the parsley
Mix everything in a bowl and season with s&p to taste.