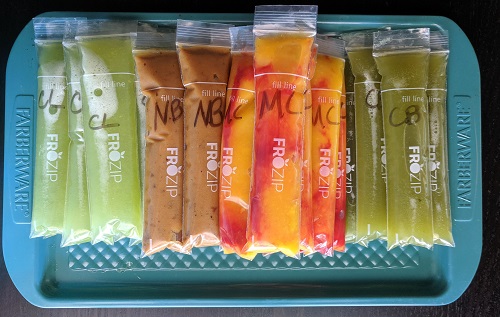 This all started because I wanted a Cel-Ray and they are now impossible to find in this town. (Feig’s Deli, I miss you so!) Of course, next I asked our Google Overlords about making it at home and that rabbit hole led to the most amazing discovery: celery popsicles.

Now, hold it right there. I know you just went “eeewww” in your head. I get it – but you have to try these. Everyone who has is now a convert.

It’s summer and I’m on a not-too-sweet icy pop obsession. It started with the salty-sweet celery basil and has grown. As in, I have a Pinterest Board for them. Here are four I tried this weekend, still haven’t decided which I like the best.
I have two popsicle molds, but honestly I prefer the fill-it-yourself otter-pop style zippie bags. Mainly because they are neater to eat, you don’t have to unmold them, and you don’t have to wash the mold. I got a set of 125 at Amazon, including a little funnel (be sure to get that – makes a HUGE difference). Each baggie holds 1/2 cup.

So, these recipes make 6-8 pops each, depending on how full you make the pops. Give ’em a try, love. They’re tastee!

Salty-Sweet Celery Basil
(slightly tweeked version of the Jerry James recipe linked above.)
2 c. celery juice (about one hefty stalk [12-ish ribs] of celery)
1 c. simple syrup
20 basil leaves
1 tsp. Kosher salt
Make the syrup first. In a saucepan, put ¾ each water and sugar. Put on a medium heat stirring occasionally until it is clear. Remove from the heat, throw in the basil leaves, stir and then leave it to cool.
Wash and trim the celery, cut in to 2”-3” lengths and puree in the food processor. Strain. If you are a little shy of two cups, add a little water. If you are off by more than half a cup, puree more celery.
When the syrup is room temp, mix it with the celery puree and the salt. Pour in to the pop mold of your choice and freeze for four-plus hours.

Roast the fruit, mix the rest of the ingredients in a metal bowl. When the nectarines come out of the oven, toss them hot into the bowl, give it a couple stirs and leave it to cool. When it’s room temperature, puree the fruit (reserve the liquid) and then add the liquid in until it is to your taste.

Pour in to the pop mold of your choice and freeze for eight-plus hours.

Stir everything together, pour in to the pop mold of your choice and freeze for four-plus hours.

Mix the mango puree, lime and simple syrup. Drizzle a little chamoy down the sides of the pop mold of your choice, and then fill with the mixture. Freeze for eight-plus hours.

The pops made with pureed fruit, the more dense ones, took much longer to freeze than those that were mostly juice.

Interestingly enough, it was the cucumber lemon that was the most popular at my office, seconded by the mango chamoy.